Making a mistake is only a mistake if you don’t learn anything from it. 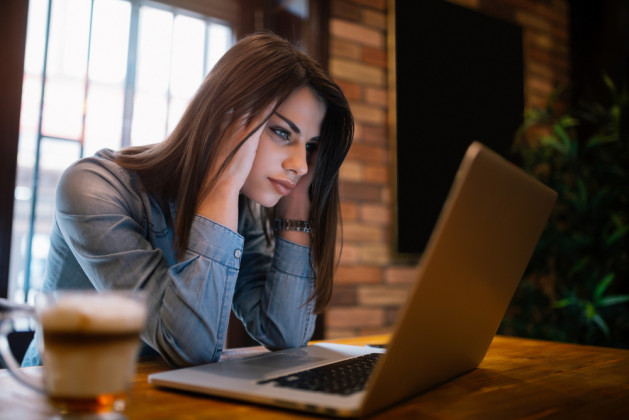 Nearly every entrepreneur and businessman, all the way up to the likes of Warren Buffett and Bill Gates, have made major mistakes in the course of their business lives. In fact, making mistakes is an integral part of being an entrepreneur. The ability to overcome these mistakes, however, is what really makes a successful entrepreneur distinct from one who ultimately fails. If you can convert failures and mistakes into positive motivation, you’re on your way to becoming a successful small business owner.

Read on to find out the biggest mistakes 12 entrepreneurs ever made, and what they learned from it.

“I created my wedding planning business with my identical twin sister, and it was wonderful. We planned and coordinated weddings together, and I loved working with her. However, she soon got married and had children of her own, so she wasn’t nearly as flexible to pour time into the business,” said Chelsey Morin, co-founder of Double Blessing Events. “My understanding was that I was on my own and could make the business decisions from that point on. But when we talked about it later on, that was not the case! She still very much wanted to be a part of it. Whoops. Here’s the lesson I learned: communicate, communicate, communicate. Don’t just assume.”

Trending Now: The Best States to Start a Business

2. Finding a Mentor Too Late

“My biggest business mistake was not getting mentorship sooner. I spent more time than was necessary going it alone, figuring it out on my own, and often being the one everyone else approached for guidance. That type of dynamic results in deep feelings of isolation and frustration,” said Joy Donnell, founder of SUPERJOY Media. “I got my first mentor by telling them that they had to mentor me. So, I didn’t ask properly. But for me, it was obvious that we were supposed to form a synchronistic bond. My pitch was so surefooted that they said ‘yes’ on the spot. I’ve come to realize that mentors help you see around corners, advocate for you, and can even sponsor you into rooms that change your life. It’s been a lesson well learned and I had to learn exactly the way I did.”

“Perhaps the biggest mistake we made as a business was trying to grow too quickly. When things started to take off for us, we figured okay, let’s take our current business model and simply multiply it. What could go wrong right? What’s working for us now will surely work the same at scale, right?” said Mark Webster, co-founder of Authority Hacker. “One thing we failed to anticipate was that short-term success isn’t always sustainable. Just because something worked well for us during our startup phase doesn’t necessarily make it a good long-term strategy. It didn’t take long for our initial success to plateau which left us with an overworking, underachieving business. As a result, we learned that business growth should always happen slowly, steadily and never during periods of high success. Always fully assess the situation and look at the longevity of your business before expanding.”

“The biggest business mistake I ever made was not taking action sooner. I dreamed about starting my business for years, but never did anything about it. Until one day I’d had enough and decided to start doing instead of dreaming,” said Ian Wright, founder of British Business Energy. “The big lesson is that it was much harder than imagined but also so much more rewarding. My main regret is that by not starting sooner, I’m further behind where I could have been. So, my main lesson is if you have any idea on starting a business take concrete action today to turn that dream into a reality.”

“I think my biggest mistakes in business haven’t necessarily been glaring, stupid decisions so much as just lacking experience and are things you only learn with time and experience. Early on, however, my supply chain was a mess. I didn’t have good suppliers, I wasn’t making great margins, I didn’t have good shipping contracts negotiated so the amount of money we made was fairly low. I remember one month we did over $250,000 in sales, but the net revenue was actually quite low,” said John Frigo, founder MySupplementStore.com. “Fast forward a couple years to when I had a better supply chain setup, better margins [and[ multiple suppliers so I could hop around and negotiate and [get] better shipping rates negotiated with FedEx. At that point the business had slowed down a bit, we were doing maybe $100,000 to $150,000 per month in sales but were making two-to-three times what we were doing the larger numbers years earlier. Something like that you only can learn from experience and trial and error.”

“Probably our biggest mistake, which we’ve corrected recently, was to undervalue our product. Initially, we focused on providing the most affordable product in our sector, and we were largely successful. This came at a cost, however, since the lower revenue meant less budget for other important workflows,” said Stefan Chekanov, CEO and co-founder of Brosix. “After coming across research demonstrating that customers see products which are significantly cheaper than competing products as unreliable, we decided to change our approach. We’ve since significantly increased the price of our product and we found that the total number of conversions has remained stable. The lesson learned for me is to not undersell yourself and to not assume that price is always the overriding consideration for customers.”

“One of the biggest mistakes that I made as a business owner and founder was not successfully communicating my expectations and the vision to the team during our first two years in business. Communication is probably one of the most important, if not the most important, aspect as a business owner. The hard part is understanding how to effectively communicate to the team,” said Elandas Miller, founder and CEO of Kicking It Sports. “Everyone’s style of communication is different, so a business owner or leader must be able to accommodate those different styles. I messed up when I was not upfront with the team on the things that I expected from them. I had expectations in my mind, but never communicated to them. We must understand that no one has mind-reading powers, so if nothing is said, then there is no way that you can expect something from someone.”

“My biggest business mistake back when I first started in late 2015 was not focusing on my personal brand as much. I just focused on the work and I had plenty of happy clients, but I didn’t do enough personal outreach to establish myself as an expert,” said Gaurav Sharma, founder of BankersByDay. “So, my biggest lesson has been that while marketing the product is always a good idea, sometimes marketing yourself can be even more fruitful, especially in the new-age economy. That allows you to pivot from one focus area to another without losing momentum.”

9. Hiring Employees Before Your Ready

“One of my biggest mistakes was hiring an employee as soon as I opened my co-working space. The mistake wasn’t her — she was great. The problem was that revenue couldn’t support her and me,” said Kayla Pendleton, owner and founder of Make Her Mark, a co-working space and community for women entrepreneurs. “I solved the problem by finding freelancers for very specific projects that needed to be done to get the business going. As I grew, I scaled my services by bringing in specialized contractors, again for very specific projects. It worked great and now I have two full-time employees.”

10. Clients That Are a Bad Fit

“Before starting this business, I ran a website design agency with a business partner. He had been an entrepreneur for a while and had made all the mistakes and thankfully he helped me avoid many of the big ones. One thing he talked about constantly was qualifying prospects to make sure they were going to be a good fit for how we liked to work,” said John Hill, founder of Adapted Growth. “One time, I decided to chase the money on a deal even though I knew that it was going to be a rough project. I charged a little bit extra to cover for the roughness and it turned out to be worse than I ever expected it to be. Now I am a qualifying wizard, and really focus on bringing in clients who are a great fit and refuse to chase a deal that seems like it will be difficult.”

“We founded CROSSNET in 2017 after we had been sitting on our ‘million-dollar idea’ for what seemed like decades. Once we had a finished prototype, website and product shots, we launched pre-orders to hundreds of excited fans. Customers purchased with the understanding that they would be receiving their product within the next few weeks, but behind the scenes we were running frantic working with our manufacturer to get the CROSSNET’S state-side,” said Chris Meade, co-founder of CROSSNET. “Days turned into weeks, and weeks into months while we dealt with our first onslaught of e-commerce customer service. Sixty days later we received our first purchase order and fulfilled hundreds of orders throughout the next sleepless 48 hours. We learned a rough lesson in customer service on launch day and have made sure to always 100 percent confirm landing dates before making any promises to customers or clients moving forward.”

What every small business owner or aspiring entrepreneur should take away is that mistakes and failures are an inherent part of being in business. The key is finding a way to turn these downturns into positive, practical learning experiences. What separates a successful entrepreneur from one who’s not is not a lack of failure, but a lack of learning and overcoming it.

What Does Pending Mean in Real Estate?

There’s a fair amount of industry-specific terminology to keep track of in the world of Real Estate. If you are new to real estate and are trying to get your foot in the door (real estate pun intended), it is... Read More

Buying a home can be a long and tedious process, and it can be tough to find a piece of property that’s affordable for your budget. However, many enterprising homebuyers occasionally find excellent deals by purchasing short-selling properties. Short sales... Read More


Things to Know Before Investing in Real Estate

Real estate is easily one of the most volatile, exciting, adventurous careers one can enter. There are numerous paths to go down to become a real estate investor and an unending number of options available to you to explore in... Read More


QuickBooks Cost: Is This Product Right for You?

Businesses both large and small rely on QuickBooks to handle their accounting needs. Trained accountants and newcomers to accounting can use QuickBooks to accomplish most major tasks, including tracking expenses, making reports, sending invoices, and more. However, it can be... Read More